Did you guys know vegan smoked salmon existed? Did you know this was actually a thing? When I tried a vegan carrot ‘salmon’ (which is also called lox sometimes) for the first time. I remember this was at a cafe in Auckland and I had never heard of a vegan salmon before and I thought it was crazy innovative to use carrot as the basis for a plantbased salmon. But I was left pretty disappointed. It was tasteless and in no way tasted like salmon at all. That day I figured vegan salmon was a myth and its was a desperate try to make a non-vegan food vegan.

But last weekend at a vegan exhibition, my vegan salmon world was turned upside down. In-between all the usual suspect food stalls, there was one that really stood out because it was selling vegan salmon. I was curious enough to give it another try. So after a waiting time of five minutes, I was left with a sourdough bun in my hand loaded with the vegan salmon topped with sliced red onions and dill.

Gosh, that smokey, salty flavor bomb in my mouth simply blew me away. I couldn’t believe this was vegan. After interrogating the food stall owner I knew, I wanted to recreate this vegan salmon and see if I could find an easier way to make it even without a smoker. You know, I do like my easy recipes. Since that day, I tried many versions of the vegan salmon. And today I am presenting you with my favorite (and also easiest) recipe!

What is my vegan salmon made of? Most of the recipes I found use carrots as the basis. These carrots are rubbed with salt, baked in the oven and then sliced very thinly with a knife and marinated overnight. I did some recipe runs using carrot. I found that it was super difficult to slice the limp baked carrots into thin ‘salmon like’ slices. I also thought the whole process of salting, baking, slicing the carrots took pretty long.

That’s why I made some adjustments to the recipe which will make life so much easier. Instead of using carrots, I used sweet potatoes. Tastewise, there is hardly a difference between carrots and sweet potatoes once the vegan salmon is ready. Another advantage of sweet potatoes is that you can slice them thinly with a veggie peeler. I would boil those strips in salted water very briefly. Afterwards, you whisk together the marinade and leave the vegan salmon overnight to soak up all the flavors.

To add a ‘fishy’ flavor to your salmon, I recommend adding dried seaweed/algae. Some pieces of nori sheet (the one that you roll sushi in) will work too. I also added a couple stems of fresh dill which goes perfectly with the smoked flavors.

The one fancy ingredient on the list is liquid smoke. For those who haven’t used it yet, it usually comes as a liquid and it is a natural product made from condensing the smoke from burning wood. The smell and taste is pretty intense so a little goes a long way. A bottle is usually €10 but it lasts a lifetime. I also add it to vegan cheese spreads, tofu scramble and stir fries! 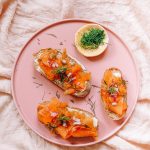 Now you are equipped with all the knowledge you need to make your own easy overnight vegan smoked salmon! When recreating this recipe, let me know what you think! would love to hear your feedback!

For more vegan versions of classic dishes, give my Vegan Butter, Vegan Feta Cheese, Sriracha Mayonnaise, and my vegan Soft Cheeses a try!