The way I explore countries is through food. Not a real surprise, huh? I am taking meticulously photos of bakery displays and my friends literally have to drag me out of any shop selling cakes, sweets or chocolate.

So did I tell you that I went to Sweden a couple of weeks back? I am not even going to start raving about Sweden’s ability to turn every product into a designer piece. If you think IKEA is stylish you have not even seen the tip of the iceberg. But coming back to Swedish food! One thing Swedes really love is skumbollar. Sounds like scumball, doesn’t it? Basically it is a Vegan Raspberry Mallow Puffs (German Schaumküsse). Swedes make really pretty versions of it adding creative toppings and different flavors. You find skumbollars in Supermarkets and delicacy shops. So when returning from Sweden I was determined to create a vegan version of it.

So I made use of the magical Aquafaba. Some bloggers have done an incredible amount of work experimenting with vegan meringue using Aquafaba. My first attempt was when I made my Papaya Turmeric Cake with Pomegranate Meringue.  It worked out ok but using coconut sugar did not give me perfect results. So with the Vegan Raspberry Mallow Puffs I used icing sugar. I have to admit they are not too healthy but I really love them! They look great and the raspberry flavor is divine. Don’t you think they look like boobs a bit? So I guess the ladies will love them for the taste and the guys for the look!

Some aspects that might help you when making those Vegan Raspberry Mallow Puffs (German Schaumküsse): 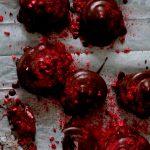