Flapjack is one of the things I look forward to most every single autumn! There’s something so rich and luxurious about the simple dessert that makes it ideal for serving at an autumnal family gathering or even just eating with a mug of coffee while wearing some super thick socks. In this article, I’m going to run down what a flapjack is, technically speaking, as well as introduce you to my latest obsession: Vegan Apple Pie Flapjack!

Well, flapjack can mean two different things. In the US, it’s often taken to be a pancake, but in the UK it’s an autumnal sweet treat. It’s a very dense cake made up of oats, golden syrup, and melted butter. It is typically sliced and served in little rectangles as a snack.

Use Muesli for a recipe shortcut

That’s the basic recipe, but, of course, there have been a number of alterations over the years. For one, people have started using muesli instead of just plain oats for a greater depth of flavor. Using good quality muesli means that you’ll end up with a delicious flapjack filled with dried fruits and succulent oats.

In our recipe, we’re going be using muesli. For weeks I have been snacking myself through the organic muesli product range of Bauck Hof. All of their mueslis are super tasty (I love that they are really low in sugars too) but if I had to pick out my favorites, I would opt for the vegan Berry Oat or the Chocolate Oat muesli mix. Since the Berry Oat muesli has all the beautiful raisins, dried blueberries and dried apples, its is the obvious choice here.

Of course, since it’s a vegan recipe, we aren’t going to be using the traditional butter, instead, we’ll use a vegan substitute. For an authentic taste, try to use a vegan butter that tastes a little like the real thing, but if you can’t get that then coconut oil will work just as well.

Without further ado, let’s get baking!

Start off by preheating your oven to 180˚C. While the oven’s preheating, make sure you prepare a brownie tin. Rub some neutral oil or vegan butter over the surface of the pan. Then, place a layer of baking parchment over the top. Strictly speaking, you only really need to do one of those things, but I always find it easier to do both.

Once you’re satisfied with the mixing, press all of the ingredients into your prepared tin. Make sure to be firm, as an air pocket can ruin the dense texture of a good flapjack. Next, put the flapjacks into the oven, and bake for thirty to thirty-five minutes, or until golden brown.

While the flapjacks are in the oven, you can melt your white chocolate, and make sure to keep it melted. The two easiest ways are to use a bowl over a pot of hot water or to simply crush the chocolate up and throw it in the microwave for thirty-second increments. As a quick aside, it’s worth saying that whatever method you opt for, don’t get any water in the chocolate. It will ruin the texture completely and you might have to discard it and start again.

When the flapjacks are golden-brown, remove from the oven, and spread the melted chocolate on top. Allow the whole thing to cool completely before cutting into snack-sized pieces. 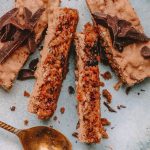 This is a really great, simple recipe that you could do with little ones as the autumn approaches. What says autumn quite like carving a pumpkin while you’re occasionally nibbling at a delicious vegan apple pie flapjack? To be quite honest, I don’t think anything does.