The recipe for these Spiced Plum Yogurt Popsicles definitely come under the category: how to deal with 10kg of plums! Although I do not own a garden, I regularly check a really cool website that discovers spots for harvesting free fruit, nuts and herbs in public places, parks or even peoples backyards. It is a German website but I am sure that there are country specific websites offering the same. It is part of the foodsharing movement which fights food waste and makes public food available to everyone. So I found out about this lake that was lined with plum trees. A bike ride and some hours of fruit picking later, 10kg of plums entered my kitchen.

So how do you use up plums?

I went all bubba-gump-shrimps on my plum harvest. I made plum sauce, plum marmalade, plum crumble, plum compote and plum cake. And to finish it all off, I made these Spiced Plum Yogurt Popsicles, or as you might want to call them: the easiest vegan popsicles you have ever made.

By the way, if you still have some cool ideas on how to use plums, let me know! There are still a couple of kg’s sitting in the freezer!

The ingredients are straight forward. I used 2 main ingredients: a spiced plum compote and coconut yogurt. The plum compote consists of cooked plums with cinnamon or – if you like – your favorite fall spices. Depending on your preferred level of sweetness, you can add more or less coconut sugar. You could also go for sweetened yogurt too and leave. out the sugar in the plum compote entirely. All up to you. I decided to sweeten the compote slightly more and leave the coconut yogurt plain so the sweet and tangy flavors balance perfectly.

To give these Spiced Plum Yogurt Popsicles the fancy shapes, I used my really handy silicone molds. Especially for this recipe they are really cool as you scoop in the yogurt and the compote in turns and using a fork you create these ‘cheesecake swirls’ without making a mess. 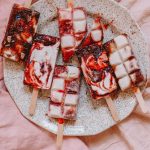 For more healthy vegan ice cream popsicles, you will also love my Peanut Butter Magnum, my Rainbow Coconut Popsicles and my Banana Niceceam Sandwiches! If you are after a full guide of how to create healthy vegan popsicles, find it here!