Aren’t these Raw Vegan Mushroom Treats just the cutest cookies you have ever seen? But can we just talk for a second about HOW MUCH they actually look like real mushrooms? I had so many people commenting that they thought they were actual mushrooms coated with chocolate. But be assured, they are made from delicious vegan cookie and the stems are made from dates.

How did I come up with this crazy idea to make little mushrooms from raw cookie dough? Well, it started with a cookie cutter…

The real inspiration behind these was an age-old mushroom cookie cutter from my mum which I dearly love. The initial idea was to cut out usual cookies from a raw dough but then I started thinking about the idea of a real mushroom treat instead. So I started playing wit the dough like a little kid putting things together and there they were.

What do you guys think? I think they would not only be the perfect treat for the healthy snacker but also very much for little and big kids like me! They look like winter and taste like Christmas!

The dough recipe for the Raw Vegan Mushroom Treats is adopted from my Gingerbread Bombs which is another healthy Christmas treat you should definetely check out! 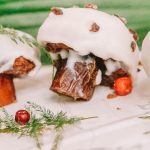 If you are recreating my Raw Vegan Mushroom Treats I would love to hear about it! Leave a comment or tag me on Instagram or Facebook @whensweetbecomeshealthy so I don’t miss it ♥