Vegan Eggnog (aka. German Eierlikör) has been on my list of want-to-make-recipes for a million years now. I am not a big drinker but I always had a weird weakness for this boozy vanilla drink. I think a big part of my eggnog obsession comes from the fact that in Eastern Germany we drink eggnog from tiny chocolate cups. Crazy huh? I love it cause you can literally eat a chocolate cup every time you take a shot. For this recipe, I replaced the classic chocolate cup with a chocolate Santa which makes the Vegan Eggnog extra festive. I found the vegan Chocolate Santas here.

The recipe is not new and I don’t claim it because amazing bloggers have worked this recipe out way before I did. But I gave it a couple of tries and tweaks to ‘healthily’ the recipe. Instead of sugar, I used a calorie-free sweetener which is called Erythritol which is made from corn. I have tried Xylitol (aka birch sugar) as well which is made from birch bark and it works great. Although I have to say there are very different qualities out there that differ in taste a lot.

You will find 2 ingredients on the list which might sound unfamiliar or weird to you. Both of the are in fact optional, so you don’t need them to make a delicious eggnog. First of, Kala Namak is a sulphur salt that tastes like egg. No kidding, it tastes so much like egg only use it in very small quantities. For the eggnog it is not vital but it does give that slight ‘eggy’ flavor.

Secondly, there is turmeric. It is only used for color and not for taste. It gives the eggnog that yellow color that you would otherwise get from the egg yolk. But no problem, as you know there is always a vegan fix for everything, right? Use turmeric sparsely as well, the flavor can be overwhelming otherwise.

If you don’t have time to make your own vanilla pudding or want to fast forward on the cooling time, it pays off to simply buy a vanilla pudding that you blend with the vodka, vanilla paste, kala namak and turmeric in your blender. Easy peasy! 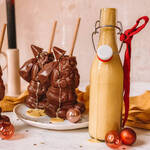 Need more inspiring festive recipes? Make sure to check out my: